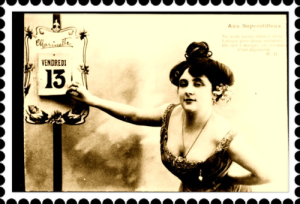 Here are a few fun facts of Friday the 13th to get you in the mood that it’s a good day:

o   The Chinese, Pagans and others in ancient times marked time by the lunar cycle and calendar, thus 13 was considered a very lucky number.

o   Egyptian philosophy believes life is a mission for the eternal afterlife. This journey walks through 13 levels, the first 12 in this life, at death the 13th level. The number 13 symbolizes death as glorious and attaining “real life”. But you must go through the 12 stages first.

o   Fear of Friday the 13th is called Triskaidekaphobia.

o   The fear of Friday the 13th started as a Norse Myth where 12 gods were having a party in Valhalla (Heaven) and capricious Loki came as the 13th guest and arranged for Hoder the Blind to shoot Baider the Beautiful with a mistletoe tipped arrow where he died and the earth grew dark.